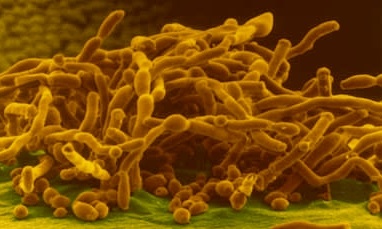 Candida Albicans, magnified
Candida albicans is a yeast and also a fungus. Like many or most other yeasts, Candida can grow in a cellular form or a fungal, larger more penetrative form.

Candida in the fungal state has root-like rhizomes which can penetrate out of the intestine, it's normal habitat, right through into the tissues of the body. Once in the body it can grow anywhere, and dumps a lot of waste toxins which compromise almost everything in the body, including mood and brain function.

Once growing well in the body, Candida often overwhelms the immune system and can contribute to the development of cancer. Cancer itself is quite fungal in nature, according to top top researchers and therapists who study natural cures for cancer.

Other conditions like athlete's foot, smelly feet in general, and jock itch are pretty much a guarantee that there is Candida overgrowth in the body. Thrush is a visible growth of Candida in the mouth, usually presenting a thick whitish coating on the tongue.

People with Candida overgrowth are almost always bloated or feel bloated. There is often excessive gas, with much burping and or flatulence. Digestion is often compromised with likely new allergies and intolerances developing.

Getting Rid of Candida
Bye-bye Candida, bon voyage! It is not difficult, even though there are many more complicated difficult methods, let’s focus on direct, efficient, and doable ones. If we learn some unique properties about Candida albicans, which are quite different than your healthy body cells, then we can put together a non- toxic assault system which does no harm to you.

The most important differentiation I'd say is that Candida does not like high levels of oxygen and especially of oxygenated water, also called hydrogen peroxide, or H2O2. Your cells thrive in higher oxygen and especially your immune cells love some H2O2 around. That's why your white blood cells make H2O2 right in your body- they know what's going on, and so they make this stuff that kills Candida yet does no harm to any of your own cells!

Now, if you were to take generous amounts of vitamin C, you measurably increase your immune production of H2O2. One could go right up to gut tolerance of vit C, which for me is in the 15-20gm level, daily. Meaning I can take up to around 15- 20000mg of vitamin C without gut disturbance, mainly in the form of diarrhea. The more C you need, the higher your tolerance. As an example, myself and others have noticed that when we have a flu or cold, we can take far more (personally I have done 60 grams in a day) with no gut issues at all. Why? Because when we are ill, our bodies need more vit C, and so we absorb it all from the gut efficiently, leaving none behind, to cause "the runs".

Heavy Artillery
One particular fellow I met devoutly followed a very strict anti-Candida diet for months with no relief! Imagine knocking yourself out, carrying your own food around with you to functions, avoiding all manner of sweets and even fruit! This poor fellow was even avoiding starches, so he was living off of protein and vegetables. Remember, months into this torturous program he still had rampant Candida growth and symptoms!

So what happened next? He heard about hydrogen peroxide oral therapy, got himself a 5 dollar bottle of food grade, 35% H2O2 at a health store and began drinking one drop of it, in a tall glass of water once a day. Slowly, daily, he increased his dose, and in a few days was tolerating 5 drops just fine. He knew that he had to start slow, or risk a massively ill time with toxic-die off. You don't want to kill all the Candida right away, because all that rotting dead Candida is way more toxic then living Candida! You want to cause a slow die-off and retreat. That means one drop only, diluted in lots of water, with slow increases, one drop per day, say, as tolerated. By the time he hit 5 drops daily, he was free of all Candida symptoms!
What his super strict Candida diet could not do in months, he accomplished in about a week, with peroxide! Happy ending ...

Prevention of Yeast overgrowth
White sugar, and all refined sugars, including brown sugar and agave syrup and fructose are all super-fertiliser for yeast, including Candida. Alcohol as well. Now, the fellow mentioned above did start to drink alcohol again, but was warned at least to stay away from all sweets. He ended up being fine. Of course, I told him to eat all the fruit he wanted, as well. Fresh fruit does contain sugars, but they are a whole food sugar and from much evidence, I conclude that they are safe, good for you, and not a yeast food in the body.

Dried fruit is a bit of a no-no, since it often has quite a bit of yeast spores on it and even often live yeast growth. If you eat it with some supplementary vit C, it should be fine if you really love it - just keep the amounts small.

Apple cider vinegar is a yeast product, but I believe it is so healthy that it's benefits far outweigh the theoretical yeast issue.

Beer and wine, especially beer, I believe to be Candida growers, so avoid beer if you are prone to symptoms of Candida. Stick with dry wine or hard liquor, one shot daily maximum, or 2 if you are a larger person.

Oregano is another powerful Candida killer, and in sufficient doses, rivals H2O2 in effectiveness. I love oregano, and often put it in salads, or on any food, really. Greek oregano is available in many stores for around 2 dollars a bag or jar. In health stores I have often bought it organic, in bulk. When I lived in Italy, I helped a man with rampant Candida symptoms by counselling him to put a lot of oregano on everything he ate. He reported being very much improved in a week, with no major dietary changes.

Coconut oil is an unusually rich source of medium chain triglycerides (MCT) which are saturated fats from 8-12 carbons in length. Being shorter than the usual long chain triglycerides in our diet, these fats are more easily burned in our body, and tend to promote fat metabolism specifically. Another useful property of the MCT's for us here is that they are quite antifungal, especially caprylic acid (8 carbons) and capric acid (10 carbons). More information on this much maligned fat (coconut) is in my FATS section on this website.

Natural born Killers
Other killers of yeast, especially of the human-invading Candida albicans besides the very potent oregano include;


Other Yeasts
The main yeast used to make bread, beer, wine and vinegar is Saccharomyces cerevisium. It is not the same organism as Candida, but being a yeast, the prevailing theory is that one yeast can help promote another. This is the reasoning for telling people with Candida overgrowth to avoid all alcohol, breads, and vinegar. Sourdough bread is made without the use of commercial yeast (Saccharomyces), however it uses a natural sourdough culture which means a blend of often wild yeasts. So sourdough bread is still a type of yeast product. S. cerevisea (common bread yeast) is very valuable because it takes something which is not so easily digestible (whole grains) and helps to break it down, rendering it more nutritious. Whole grains are quite nutritious, but wheat, barley, oats and rye all contain quite a bit of fibre and phytates and other digestion interfering substances. Growing yeast in them causes a partial breakdown of many anti-digestives, let's call them and also the yeast themselves produce many beneficial nutrients, like RNA, DNA, B vitamins, and proteins. In fact, the most nourishing bread is allowed to rise fully for upwards of an entire day. Some artisanal bakeries (like St John's, on Broadview Ave in Toronto) still let their breads rise for a fuller amount of time. All commercial large bakeries (say, Weston or Wonderbread) do not, and their bread is less digestible and nutritious.

Saccharomyces cerevisium has been found in the research to produce anti-fungal substances. This makes sense because conditions that are good for the growth of one yeast would likely be good for others, but S. cerevisea would want to gain an advantage and not share it's food source. Killing other yeasts would ensure it's preferential growth. S. cerevisea produces capric acid which is quite inhibitory to C. albicans, the dreaded "Candida" yeast that can grow in our bodies causing the miserable symptoms described above. Capric acid is a 10 carbon medium chain fat, also found in large quantities in coconut oil as mentioned above and some in dairy from grass-fed cows (think organic).

Personally, I think a reduction in alcohol consumption for those who have more than 2 per day is good enough, as outlined above. As for breads, I think they are fine to consume in limited quantities during a Candida kill program. Of course, the final word is your own body. If you eat or drink anything which specifically bothers you by any noticeable symptom, then avoid it at least for a while and give your body a break from it.