CURE for Herpes?
When I hear that a certain condition or disease has no cure, I have learned to doubt it. I have met people who cured themselves of cancer with cheap non toxic therapies, as well as multiple sclerosis, lupus, and others, including herpes.
The official word is that herpes can't ever be cured or eradicated (which is Latin for pulling out by the roots). Doubt the official word - as much as it may be profitable for someone with herpes to take drugs all of their lives to suppress flare ups, herpes CAN be eradicated from the body. Never to return.
In terms of suppressing outbreaks or getting rid of outbreaks faster, lysine is quite helpful according to many folks. Stack it with vitamin C and immune boosters like echinacea for best effects.
Quantum (USA) makes a great lysine product with lysine vit C propolis echinacea and more. A bartender with oral herpes told me it was super effective.
Propolis is also great to add in, as is chaparal, a ridiculously bad tasting herb. Hard to find chaparral; too bad because it is massively helpful for herpes and also other viral conditions, from flus to HIV.
Case #1
Woman contracted genital herpes from a condom breaking with a partner who had previously told her he had herpes. She was in much pain and searched the net for possible cures and told me she had found one.
As a nutritionist seeing many many people as clients and in my various roles in doctors' offices and health food stores I am blessed to have a great many people educate me about their experiences.
​What she had found was some research out of Italy claiming that hydrogen peroxide via IV could eliminate herpes entirely.  My being familiar with hydrogen peroxide therapies I already knew anti viral effects were well proven, but hers was the first case I had heard against herpes.
She reported to me that her Herpes symptoms which were quite severe and painful immediately subsided after one IV and she had a few subsequent IV treatments and never had an outbreak again, in spite of a trigger of extreme stress some time later.

Case #2
A close personal friend who of course will remain anonymous told me he had an "STD" with symptoms on his genitals but never told me what the symptoms were or even what specific STD he had. 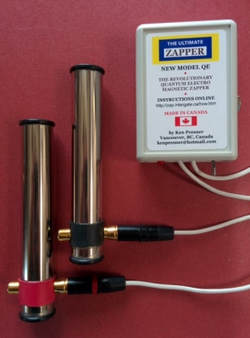 What he did tell me was that he contacted Ken Presner out in BC who makes and sells zappers. I have one of his zappers actually and use it all the time (the ultimate zapper, model QE). Presner mentioned that he'd had some feedback from people who supposedly had cured a similar condition to what my friend had, so he promptly bought one and reported to me that he was in fact cured. I'm sorry this case is so vague but it's all the info I was given
A note about zappers- first popularised by Hulda Clark as far as I know in the '90's the early "zappers" were frequency generator- shockers that sent electrical waves through your body in a frequency that would kill pathogens including parasites. Early models were quite crude with varying effectiveness.Probably the best feedback I had with my particular zapper was from a family member who had to get a few vaccinations according to her employer and called me crying right after saying she didn't feel well and that she feared side effects. I had her come straight over and we zapped her with my QE for hours. She had zero side effects. Interestingly, a colleague of hers who had the same vaccinations fainted the next day and was ill enough to be admitted to hospital for a while until she stabilised. All of her colleagues who had their shots around that time reported feeling quite ill for some time.

Water Purification drops cure disease?
On my arthritis page (joint health) I talk about my experiment drinking sodium chlorite activated with citric acid. I found my troubling arthritis in my thumbs was quite alleviated in a short time drinking that (nasty tasting) combination. Canada and the USA have pretty much outlawed selling sodium chlorite plus an acid activator as a health product, but you can still buy it (way overpriced and not very concentrated) as water purification drops. Or you can just get your hands on some sodium chlorite and also citric acid powder and make your own concentrated drops, according to Jim Humble's recipe. That's what I did  ; )
Why do I mention this stuff on my STD page?
Because people are saying they have cured herpes with it!
Now let's take a closer look at Jim Humble, the fellow who traveled through Africa and cured so many cases of malaria with the above mentioned solution. I read his book. He tells you in explicit detail how to make your own solutions, and cheaply. Yet he's called a quack by many dis-informers. I like to follow the money, and Humble doesn't seem to be getting rich anytime soon telling people in great detail to make their own and encouraging them to do so and give away bottles to help cure the world. He knew it would likely cure a lot more than malaria and he's right.
Other sexually transmitted conditions
I haven't had feedback with conditions other than those mentioned above. As I learn more I will endeavour to share more on my site!
Powered by