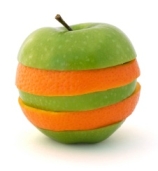 type AB; the mixed type
As a Type AB, there are well tested foods which are beneficial, others which are neutral, and some which are harmful for you, especially when over-consumed. Some seaweed and or arabinogalactan powder, isolated from Larch tree sap both contain "sacrificial" glyco-amines that help neutralise stress to the system from making exceptions to the type AB rules. I myself consume enzymes, moreso when eating foods that are on my "no" list, again to optimise the processing in my body of these foods. Type AB's are the most recent and rarest blood type, originating about 800 to 1000 years after Christ. They resulted from interbreeding of type A's with type B's, becoming a hybrid, new type. They share the low stomach acid of type A's and so an HCl supplement when you eat meat is a good idea. They also do well with dairy, which they get from their type B genes.
The pic is a apple/orange, symbolising that the AB bloodtype person is genetically a hybrid of A and B, sharing characteristics of both genetic codes. Type AB is the most recent human blood type genetic type.

The harmful foods are negatively reactive for type AB’s, stressing the body in various ways. Dr D’adamo says that the ‘negative’ foods should still be eaten, but much less frequently, for dietary variety.