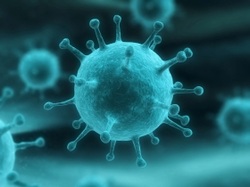 a Flu virus
Flus and Colds no more!

All viruses, including the corona types have universal rules that apply to them, which you can use to your advantage!


The common cold and flu, short for influenza are beatable, or at the very least can be greatly reduced in severity and frequency. Other viruses may be addressed with the same prinicples; corona, herpes, Epstein-Barr, Lyme cluster, AIDS and more.

If you're getting flus and colds often and if they are fairly severe, it means your body needs something to rebalance it! In other words something is wrong, if you are often ill! Ditto if you are getting frequent herpes outbreaks' shingles and other myriad viral symptoms.

Vitamin D deficiency is a big deal! Most people are deficient in this vitally important vitamin, and being low in vit D means you will most likely suffer much more from a virus which may leave others completely unaffected or just mildly and temporarily ill. So don't be another statistic. According to Dr. Joseph Mercola, "Vitamin D supplement dosages have recently been revised based on the latest research data. Most adults need about 8,000 IU's of vitamin D a day to achieve serum levels above 40 ng/ml, which is still just below the minimum recommended serum level of 50 ng/ml. Children need about 35 IU’s per pound of body weight". I love Mercola- that man always does his homework and he digs deep to arrive at a complete picture of much of what he writes about.

I have a video which is short and very informative on vitamin D - it is safe - in fact not taking vitamin D in sufficient doses is dangerous- "overdosing" is largely a myth. Under-dosing is what we need to worry about! Watch my video, here

Vitamin A is synergistic with vitamin D. Both are some of the cheapest vitamins around. Recently I had a stomach flu and while friends reported symptoms of vomiting, diarrhea and severe malaise, I only had tiredness and lack of appetite. I kept my flu in check with 100 thousand iu of vit D, three days in a row, along with 100 thousand iu of vitamin A. Both taken with food, since they are fat soluble vitamins that require some fatty foods present for best absorption. I have seen positive research with 200 thousand iu of vitamin A on infants with diseases like mumps and measles. I have also seen research proving 500 thousand iu of vitamin D was safe for adults. There is no proof I have ever seen that one can overdose on vitamin D. With vitamin A I saw some evidence of temporary toxicity after 2 months of daily administration of 100 thousand units daily. I would comfortably take that much for a week or two at a time for various conditions, like IBS, IBD, or illness.

Say NO to vaccines. People like Dr Leonard Horowitz, who used to be a vaccine sales rep, and Dr. Anthony Morris ex chief vaccine control officer of the USA, and Dr. Robert Mendelson, peadiatritian, med school professor and hospital director will all tell you vaccines are generally harmful and ineffective. If vaccines caused some harm and some serious risks yet saved some people from disease, they might be worth it. But they are ineffective! So the only thing they can do is hurt you. Don't take my word for it, research these guys and other doctors who have seen the light - they are all over the web, including on youtube, googlevideo and really any web search will turn them up, however note that Google is increasingly censored against alt health. SO try bing.com or duckduckgo.com for some more uncensored information.. There is large, large money behind vaccines- the swineflu shenanigans, for instance, made many millions of dollars, "protecting us" from a mass hysteria publicity stunt. Remember, the swine flu was benign, killing far less people than a run-of-the-mill ordinary flu. Even the covid numbers pale in comparison to some recent flus.

Dr Rauna Kilde, former health Minister of Finland realised in her experience that most vaccines are a scam, or worse, designed to sicken us and create more pharma consumers, or other nefarious effects. They do not do what they claim, which is to immunise us against disease.

According to the Huffington Post (Canada) "The Ontario Nurses' Association plans to file grievances against hospitals that require them to either become vaccinated or wear a face mask. In the U.S., National Nurses United, the country's largest organization of nurses, cites a National Institute of Allergy and Infectious Diseases study that found increased flu vaccination rates didn't lower death rates among the elderly, as is often claimed, or among any other age group either."

Ok so back to vitamin D. Are you deficient? Probably, according to an article in the Globe and Mail, published March 24, 2010, where it said "60 to 70 per cent [of Canadians] have inadequate levels". Not that we need a corporate shill like the G & M to teach us anything about nutrition, just thought I'd throw that quote in there. Point is; if you are a Canuck, you will benefit from taking extra D!

How much vitamin D do I take? I take a liquid oil form, from natural Factors, around 30-50,000iu with a meal, once a week or so. Even if I took one million iu, no harm would come of it - watch the video on D in my video section to dispel the "overdose myth", seriously. Plus, I'm a guy who tans plenty in the summer, with no sunblock, ever, and I tan a few times a month in a tanning booth, which also promotes vitamin D production in the skin. That's not why I "shake and bake" - I do it because I would rather have some colour in the winter, but the D production is a happy side effect. Speaking of happy, some preliminary evidence links higher vitamin D intake to a happier mood - and we could all use that in our cold dark winter. 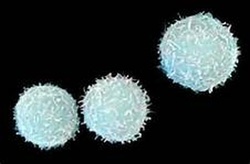 white blood cells (much larger than viruses)
Besides vitamin D, vitamin C is also proven to reduce the severity and incidence of colds and flus- the studies that actually show C works use generous doses, beginning at 1000mg per day. I personally take 5- 10 000mg per day, but that's for anti-ageing, as described in the anti-ageing section of this site.

Several times vitamin C has saved me from being stuck at home with cold or flu! I will take 5-10ooomg all at once and feel almost normal for a couple of hours, allowing me to teach and not have to call in sick. My record is around 60 grams in one day- that's no misprint- 60ooomg in one day, which gave no stomach trouble. If one is ill, the body will absorb and use far more vitamin C than it normally would. Several people have noticed this what may be called a higher tolerance. Bowel tolerance for me is 10- 15 grams if I am well. Even at 60 grams, in my illness I did not reach my maximum tolerance; I had no GI symptoms. I did feel much better for hours, though, which was much welcome in the middle of a flu. practitioners like Dr Klenner and others have often dosed people at over 100 grams (100 000mg) of vitamin C intravenously to eradicate a cold, flu or more serious viral conditions like mono, herpes, and polio. Yes you read that right, Dr. Klenner had clinical experience back in the day published as to his remarkable and confirmed success with Polio but alas, drug companies tend to squelch natural effective non-toxic therapies.

Vitamin C, vitamin D and also vitamin A are shown to be major boosters of immune function, and in my experience are entirely totally safe for "auto-immune" conditions as well. Phagocytes (a type of white blood cell that actually eats bad germs and defective body cells, become measurably more active with high doses of vitamin C.

Just Say No to Drugs
What I recommend you never take, for ANY reason is a flu or cold drug. No Contac-C, Neo-Citran or any other pharmaceutical garbage. OTC drugs are toxic and need to be avoided by people who care about their health. All they do is mask symptoms and do NADA, NOTHING, ZIP, to actually reduce the illness. They trick you into feeling better and prematurely drop your temperature actually keeping you sick longer.

The Chinese have long consumed "change of season" soup when seasons change and we are more vulnerable to fall ill to viruses. Astragalus is a prominent herb in that soup. Astragalus is one of many useful immune strengthening herbs. I also like echinacea a lot, with it's 100+ year history of use in western (white) herbology and eons of experience in our First Nations peoples' experience. Siberian ginseng is another favourite of mine, but more of an adrenal/ energy replenisher than a specific immune supporter.
Lomatium, elecampane and een St Johnswort are fairly good anti virals also.
Powered by