Moderate consumption of alcohol, which is associated with good health, is 1-2 drinks per day. Those of us who have that amount have a longer life, less heart disease, and slightly less diabetes type II, statistically. So far, so good. Now, much more than the 'moderate' amount raises the risk of many diseases and early death.

1 drink; one bottle of beer, one glass of wine, or 1.5 oz of hard liquor. For men, hard liquor would be the best choice for reasons outlined on the man's page. Although an occasional beer, say once a week would be fine.


Alcohol abuse (more than 2 drinks daily) is strongly related to nutritional deficiencies. (see references 1, 2, 3 below)
What that means is that a nutritional deficiency drives people (and even experimental rats) to drink more alcohol. One center found in New Jersey, run by a woman called Dr. Joan Larson has a success rate of about 75%. That is the rate found at one year, and stays about the same, for up to 3 years, the last time someone took an official count.
Her program revolves around the use of targeted supplements, to break the craving for alcohol. One interesting one in particular is GLA, a special fat found in our brains. Alcohol raises the production of this fat, and interestingly enough, alcoholics seem to have much less (4). This may explain some of the physiological drive to drink a lot. Also very helpful in alcohol addiction cure research are B vitamins and glutamine. If I were addicted to alcohol, what I would do is;
B complex 100mg
Hemp oil 2 tablespoons/day (good food source of GLA, added to any food) or, you can take 2000 mg of Evening primrose oil
Glutamine powder 2 teaspoons daily, am + pm, 1 tsp each time
Fish oil,  2- 4000mg/ day (Rosita, or Minami, or Green Pasture brands) avoid bad fish oil .. see my fats page for more info.
Magnesium, 400-500mg any good glycinate, bisglycinate, malate, citrate. Avoid oxide if you have a sensitive gut.

Stimulant Drugs
Cocaine, nicoteine, caffeine, ephedrine are a few stimulant drugs. Normal doses of caffeine and nicoteine are harmless in my opinion.
Ephedrine I would classify as mildly dangerous, particularly due to it's tendency to deplete magnesium. Magnesium deficiency is a big problem in our society and my number one mineral to recommend people supplement with. It is a legitimate anti-stress nutrient with many health benefits, some of which I mention on my sleep page and heart health page.
Cocaine is a killer, as is it's cousin crack. Cocaine and crack-cocaine directly kill heart cells en masse irreversibly as well as brain cells. Whatever you do, steer clear of any experimentation with it.


Other Drugs
GHB is a party drug with the lowest toxicity of any drug I know. It used to be prescribed in Europe, before the hysteria within the FDA in the USA who through their influence had this drug removed from most countries' pharmacopias. "G" as it is often called is useful as an anti-depressant, sleep aid and alcohol withdrawal aid, according to human research.
Ecstasy, or MDMA is another popular party drug which I would strongly recommend not ever doing, as it tends to burn out serotonin receptors in the brain, leading to long term depressive potential.

Downer or sedative drugs like methadone and opiates can easily cause death by arresting breathing and heart beat. The killer dose is individually variable, which means the same dose can make one person "high" and another dead. D-E-A-D. Steer clear.


Marijuana, Cannabis Sativa
Weed as it is commonly called is actually a weed; a herb and so I hesitate to call it a drug. One of the active ingredients, THC (tetrahydrocannabinol) is non toxic in any dose.
Medicinally, Cannabis is useful for appetite loss, glaucoma (excess eye pressure) and I think it shines as a pain drug. Pain killers will kill you! Avoid them at almost any cost, especially the over-the-counter ones, like Advil, Tylenol, and the like.
Maranol is a Cannabis based oral drug available in Canada on Rx, for pain.
Be aware that Cannabis is not without risks. There is compelling evidence that people with schizophrenic potential can become much worse, quickly with cannabis, and there is also some evidence of a slowing of higher mental functions with excessive or chronic use. I say some evidence, because the mental slowing as a potential lasting effect is not well proven. There is also contradictory evidence of improvements in neural health from high dose regular cannabis use.
The big caveat I would emphasise for people with a family or personal history of mental imbalance and or dissociative potentials.

Just say no to drugs
According to American statistics gleaned from organistaions like the Center for Disease Control, and the American Medical Association, prescription drugs, taken as prescribed cause between 100,000 to 200,000 deaths a year. All recreational or "street" drugs including crack cocaine and meth cause about 1/10 as much, or 10,000 to 20,000 yearly fatalities in the USA. We could probably extrapolate to about 10% of all the above figures for Canadian statistics, since we have about 10% of USA's population. 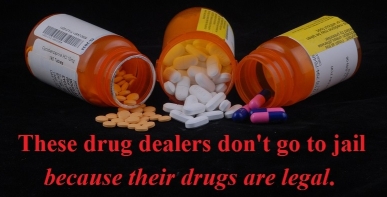